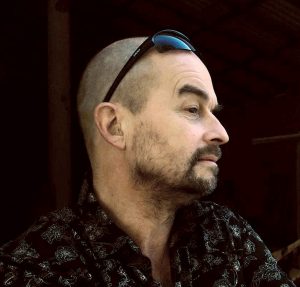 Coming from Germany, I chose the Algarve, chose Monchique, chose isolation to develop my own sculptural language. An encounter with the abstract forms through Henri Moore’s pieces displayed in an Italian marble quarry were the initial ignition. In my Monchique atelier, I began experimenting with abstract figures. With organic forms in communion with the landscape that surrounded me. Unusual forms, intertwined paths and loops of white or pink marble emerged from the forest.

The fact that I took my orientation, particularly in the beginnings my career, from predecessors and role models is absolutely part of this: in 1984, at the age of 23, I spent half a year in the famous marble quarries of Carrara, and a key moment for me was the visit to the workshop which Henry Moore kept there. The exhibited models animated me to continue exploring the possibilities of an abstract form language.

My first works, which were created during that phase, were still half figurative, half abstract in their characteristics. Only later in the 1990s, when I emigrated to Portugal, my dealing with the form finally leads to a complete abstraction.

As other key figures who have influenced my artistic self-understanding, specially the Russian Constructivist Naum Gabo (1890-1977) and his brother Antoine Pevsner (1884-1962). Both were founding members of the artistic movement “Abstraction-Creation” in Paris in 1931.

The first major solo exhibition in the year 1998, in one of the best galleries in Portugal, at the Galeria Centro Cultural de Sao Lorenco opened  finally the door to a promising career.

But numerous obstacles obstructed my path: the loss of the atelier burned in one of the great fires 2003 that devastated the mountains, and all the more so is the 2009 eye accident that has my left-eye destroyed, a big setback. Since then I´m half blind. After one year and several operations I found my strength back and continue my research and pushed myself even more into the extreme virtuosity. Faced with huge blocks of marble, I try to transform the stone in aerial curves and fragile-looking circles resting on a single point.

What drives me is the philosophical question of all questions: “Who am I”, which leads me to the inner exploration of what is constantly changing and what remains when everything we believe we are and what the world consists of has disappeared.

My sculptures express the essence and joy of what has been found and experienced. A constant questioning and sifting until my own being is reflected in all its purity and clarity in the form.

For me, form means transforming the spontaneous impulse into a conscious movement that freezes the inner state in the moment and ideally captures all dimensions, emotional, intellectual and spiritual.

Forms that lead out of stillness into stillness.